The Great Buddha as featured in a poem of the famous poet, Akiko Yosano. Exceeding 13m in height while in a sitting position, this statue is the only certified national treasure amongst the buddha statues in Kamakura.

Taiizan Kotokuin Shojosenji, or Kotoku-in, offers a walk through history and spirituality. This Jodo-shu Buddhist temple in Kamakura, Kanagawa prefecture, is home to the second-largest Great Buddha statue in Japan.

Visitors first arrive at the Nio-mon Gate and, after purchasing tickets, arrive inside to catch their first glimpse of the Great Buddha (daibutsu). At the chozuya basin, guests can clean their hands before continuing on to the main attraction of Kotoku-in, the bronze Amida Buddha statue.

“Here in Kamakura/ the sublime Buddha is of another world,/ but how like a/ handsome man he seems/ adorned with the green of summer,” reads the poem carved into a tablet near the Great Buddha. The waka poem by famed poet Akiko Yosano sets the mood for a sublime experience with this designated National Treasure. It has also been included in Kamakura’s proposal for inclusion in UNESCO’s World Heritage Sites, along with 21 other historic sites.

The Kamakura Buddha is an impressive 13.35 meters (43.8 feet) tall. The colossal 121-ton (267,000 pounds) bronze statue sits in the open air, making it unusual amongst the large Buddha statues of Japan, which are typically housed. The Great Buddha of Kamakura was cast in 1252 and was also once housed inside a large temple hall. However, natural disasters in the 14th and 15th centuries destroyed the hall, prompting the gilded statue’s move outdoors in the late 15th century. As a result, only traces of the original gold leaf remain on the Great Buddha, primarily near the statue’s ears. Guests to Kotoku-in can also enter inside the Great Buddha statue for a small additional fee. Behind the Great Buddha you can even see some of the original bronze-cast lotus petals from the original base.

But the Great Buddha statue isn’t all that Kotoku-in has to offer. Nearby you’ll see a giant pair of traditional Japanese straw sandals (warazori) first donated in 1951 and made anew once every three years in the wish that “the Great Buddha would don them to walk around Japan, bringing happiness to the people.” The temple shop sells a variety of good-luck charms and other souvenirs, while the commemorative seal service welcomes visitors to stop in and obtain the commemorative red seal (goshuin). Beyond the main courtyard is Kangetsu-do Hall, believed to have been part of the imperial palace in the mid-15th century Hanyang (present-day Seoul, South Korea) before its relocation. The hall also houses a standing image of Kannon Bosatsu.

Also scattered around the temple grounds are twenty stone monuments, some inscribed with poetry and words dating as far back as the 18th century. In spring, guests can enjoy the beautiful scenery of gentle cherry blossoms blooming around the Great Buddha and the grounds; while in autumn the surrounding landscape is colored in reds and golds. Whatever season you decide to visit Kamakura’s great Buddha, you’re sure to be delighted. 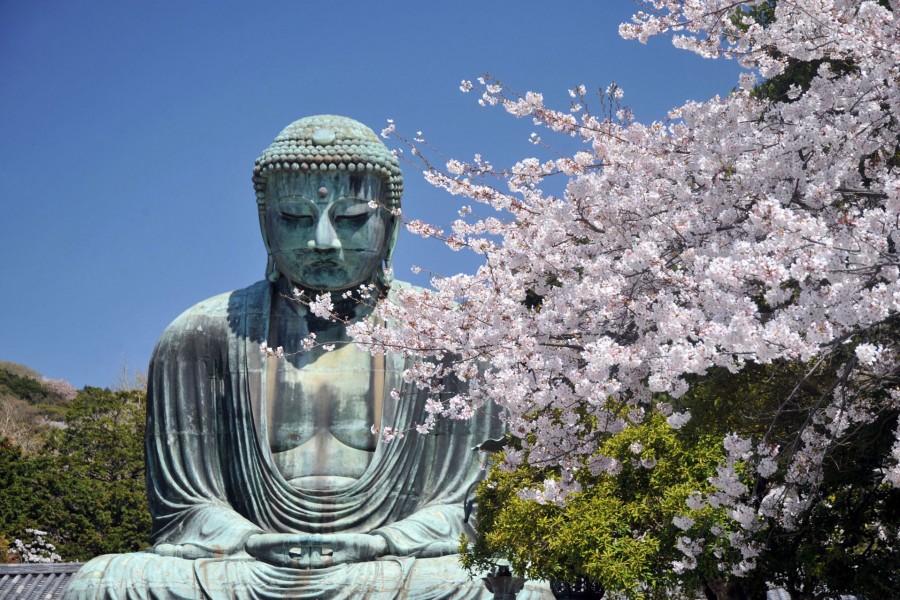 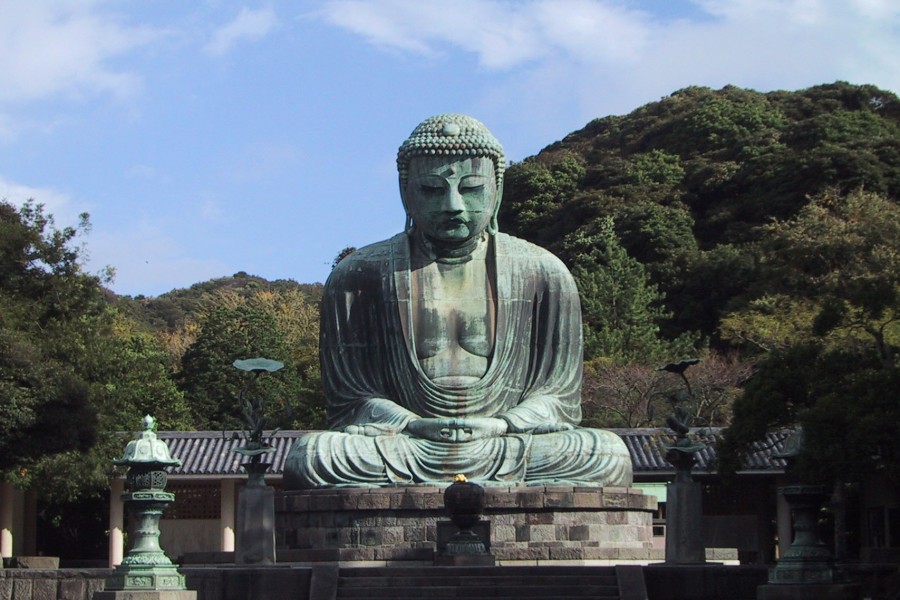