Odawara Castle is an impregnable castle that was designated as a national historic site and preserved through reconstruction and restoration. The first to fourth floors of the castle tower introduce the history of the castle from the Edo period to the present day. From the observation deck on the top floor, which is approximately 60 meters above sea level, visitors can enjoy a panoramic view of Sagami Bay. In Odawara Castle Ruins Park, visitors can enjoy a variety of flowers and plants throughout the year, including cherry blossoms, wisteria, irises, and ume (Japanese plum).

Exhibits specializing in weapons such as armor and swords are held to introduce the spirituality of the samurai and the art of the weapons.

This castle provides a fun time reliving the medieval era. Inside the castle is an excellent museum and outside, near the back, you can try on the armor of a ninja warrior for a memorable picture of your visit.

Pristine white walls and a multi-tiered gently sloping split roof cut a striking contrast against the skies of Odawara. Visitors to Odawara Castle can have a taste of history when they tour the castle grounds and the interior of the castle replica. Have a 360-degree vista of Odawara from the castle tower observation deck. At the Tokiwagi Gate, visitors can experience dressing in Japanese armor and other costumes. Or visit the Ninja Museum, based on the Fuma clan of ninja who supported the once-lord of the castle, Odawara Hojo. The children’s amusement park is sure to be a hit with the little ones as electric racing cars and a train ride will bring a smile to any face.

From February to August, enjoy one of the many flowers in bloom at the castle grounds and go for a long stroll finding all the beauty Japanese nature has to offer. If you’re in the mood for a traditional Japanese event why not visit from February to July when any number of events take place: from agriculture festivals to the summer lantern festival and reenactments or flower festivals. There’s something to please everyone at Odawara Castle.

Originally built in 1447, what began as a simple fortified resident of the Doi clan expanded over five generations and became the center of the Odawara domain, encompassing most of the Kanto region. During the Sengoku period, Odawara Castle’s defenses repelled some of the most famous names in Japanese history. Standing tall on a hill and surrounded by water-filled moats; dry ditches on the hillside; and multiple walls, cliffs, and banks situated around the castle it was able to fend off invasion by Uesugi Kenshin in 1561, and later, Takeda Shingen in 1569. In the three years prior to the Battle of Odawara (1590), then-liege of the castle, Odawara Hojo, expanded the castle defenses in anticipation of approaching conflict with Toyotomi Hideyoshi. However, the battle ended with the forced surrender of Odawara thanks to a three-month siege and bluff Hideyoshi’s part. Odawara Castle was awarded to his leading general, Tokugawa Ieyasu, but only after most of the fortifications were destroyed.

From 1870 to 1872—by order of the new Meiji government—the former feudal fortifications around Japan, including Odawara, were destroyed. The stone base became the foundation of a Shinto shrine. Further damages were caused by the 1923 Great Kanto earthquake. But at last, in 1938, the castle site was proclaimed a National Historic Site. Repairs to the Castle site began in 1950 and, in 1960, the three-tiered, five-story main tower of the fortress was rebuilt to celebrate the 20th year anniversary of Odawara becoming a city. To improve historical accuracy, the Tokiwagi Gate, Akagane Gate, and the Umadashi Gate were added from 1971 to 2009. The reconstructed Odawara Castle now stands as one the 100 Fine Castles of Japan as determined by the 2006 Japan Castle Foundation.

Odawara Castle Hydrangea and Iris Festival: Odawara Castle is designated as one of Japan's Top 100 Castles. In the iris garden located in the east moat of the Odawara Castle Keep, visitors can enjoy about 10,000 iris flowers in full bloom from early to mid June. The garden will be lit up at night which creates a mysterious vista. 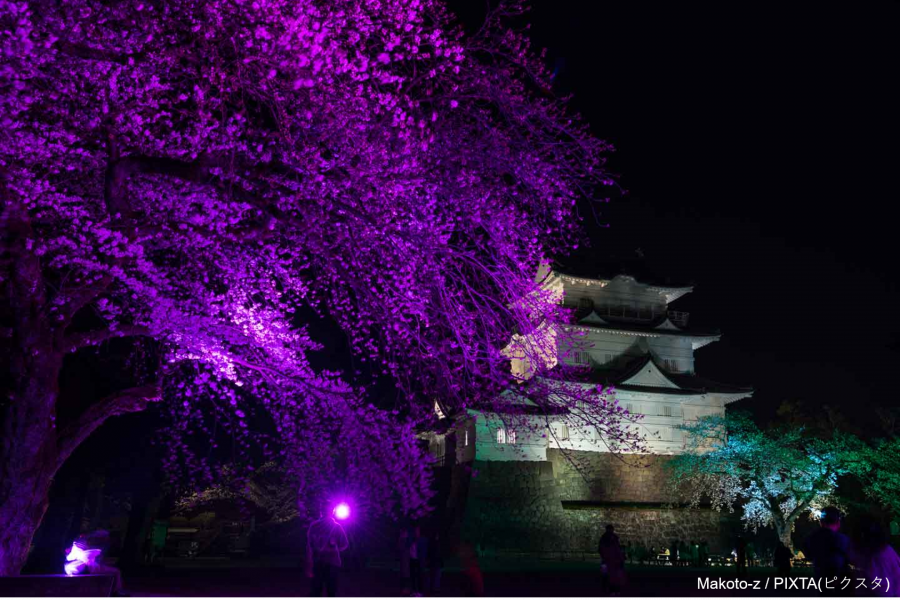