The Osanbashi Yokohama International Passenger Terminal is a major port where foreign cruise ships dock during international cruises. With a maximum height of 70m and width of 15m, the steel construction was designed by Alejandro Zaera Polo and Farshid Moussavi (a UK-based architect). The rooftop plaza provides beautiful scenery of Yamashita Park, the Yokohama Red Brick Warehouse district, and the landscape of Minato Yokohama.

Standing at 296.3 metres tall, the Yokohama Landmark Tower houses an observatory that offers a 360-degree view of the city, a five-star hotel and 48 floors worth of shops, restaurants, and offices.

Purposefully shaped like a sleek, sailing yacht, the InterContinental Yokohama Grand Hotel is an iconic structure in Yokohama's Bay Area.

The NYK Hikawa Maru is a cargo-passenger liner turned museum ship. Built in Japan before World War II, the ship is extremely well preserved and offers a unique perspective into the cruise ships of history.

Located near Yokohama Chinatown, the Yokohama Marine Tower is a perfect post-meal spot to take in 360-degree views of the city.

Osambashi Hall is found on the first floor of Osanbashi Pier. It is a 2,000-square meter hall that can house up to 1,100 people. It is commonly used for large meetings and exhibitions.

Cosmo World is a theme park located along the Yokohama Bay area. It is home to the Cosmo Clock 21, one of the tallest Ferris wheels in the world.

The Yokohama Red Brick Warehouse houses a multitude of unique shops based on Yokohama's charms. It also opens an illuminated skating rink in winter.

It is dusk and you are standing on top of the Osanbashi Pier when the lights of Yokohama come on. No matter which direction you stand there is a spectacular view.

Osanbashi Pier in the main international passenger pier at the Port of Yokohama, and the oldest—constructed between 1889 and 1896. The pier is known as one of the best places to see the Yokohama Three Towers: the King, the Queen, and the Jack. It was reconstructed between 1988 and 2002, and when reopened it was renamed the Yokohama International Passenger Terminal. The competition to redesign the pier was fierce, with more than 660 entries from around the world. But ultimately, it was Alejandro Zaera Polo and Farshid Moussavi who won the project. In order to keep the emphasis on the ships at port, the terminal’s height was kept as low as possible—only 70 meters with a width of 15 meters. Without pillars or beams, there is a vast space inside the building creating a sense of openness seldom found in other similar structures.

When the Port of Yokohama was opened in 1859, modern-day Osanbashi had only two small stone wharves to offer for visiting ships. They were known as the French and English Hatoba. In 1894, the Japanese government provided funding for an extended steel pier to replace the English Hatoba. That became the Osanbashi Pier, which survived the 1923 Great Kanto Earthquake and even the bombing raids of World War II. In 1964, the Osanbashi Passenger Terminal underwent reconstruction and was completed in time for the Tokyo Olympics that same year.

Nowadays—after the 1988 to 2002 reconstruction—Osanbashi Pier can accommodate multiple ships weighing 30,000 (up to four ships) to 70,000 (up to two ships) tons. On the first floor of the pier is the parking facility, but more entrancing by far is the gently curving observation deck with several planted grass areas, which are open to the public on the rooftop. On the second floor, you can find the departure and arrival lobby, ticketing booth, customs and immigration, a large hall for events, shops, and cafes where you can enjoy your time looking out at the wind playing on the waves. The rooftop serves as a square open to the public at all hours of the day, and visitors can enjoy a close view of the cruise ships, Yokohama city, or the open sea.

The Osanbashi Yokohama International Passenger Terminal isn’t just a major port though. Take a boxed picnic with you onto the grass fields in between the strips of sloping wood. It’s perfect for a leisurely walk or jog, or even a romantic date. The whole pier has a certain artistic quality to it bordering on the abstract and appeals to many art lovers, but you don’t have to be artistic to appreciate the simple beauty combining a steel structure with natural woods and grassy areas. It’s a floating oasis for relaxation and rejuvenation while you take in the cityscape. 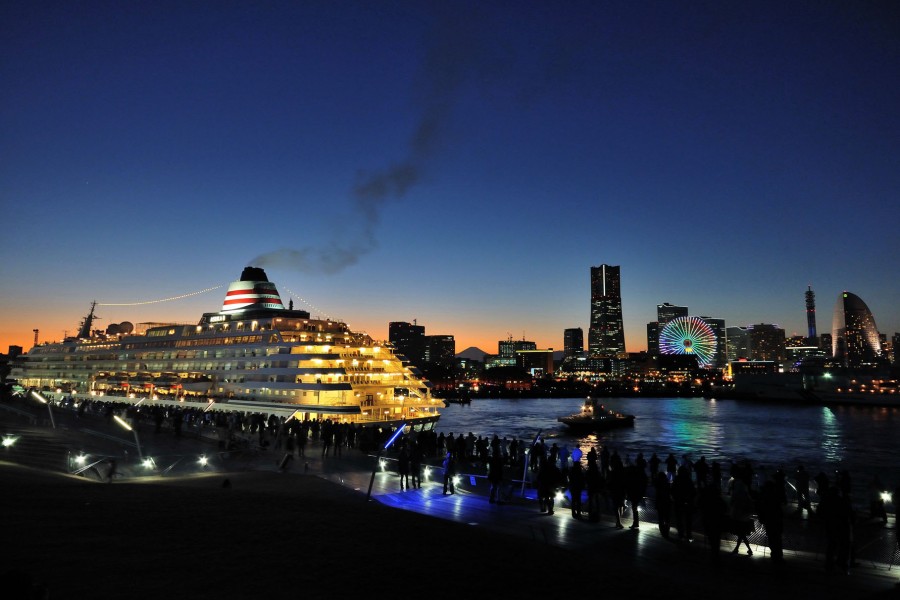 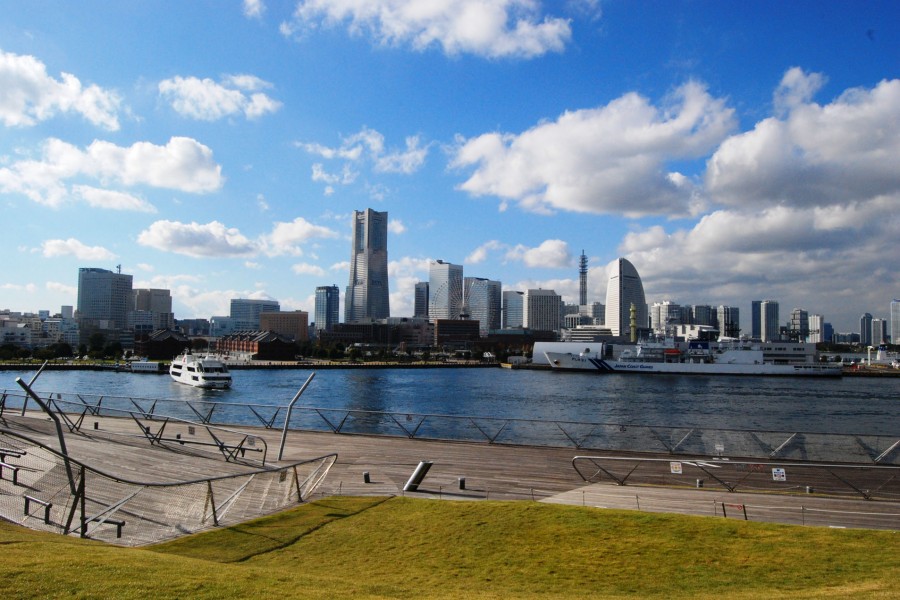